I was recently chatting with David Mendels, who works at Brightcove.  David mentioned that he thought it would be interesting to create a map of all the startups that have been fueled by people who worked at Allaire.   I agreed that this would be interesting too, so I took at a stab at it in the picture below.

My general guidelines were that someone at one of the companies on this map had to work at Allaire before the Macromedia acquisition.  Those individuals could have stayed on at Macromedia, or even through to the Adobe acquisition, but if they left and wendtto a startup, I tried to capture it here.  I’m sure I’m missing a bunch of companies.  If you have some updates I should make let me know in the comments, via email, linkedin, facebook, smoke signals, whatever.  And if we’re not already connected, feel free to drop me a line on twitter @jwall.   You can see the full size version of the map here. 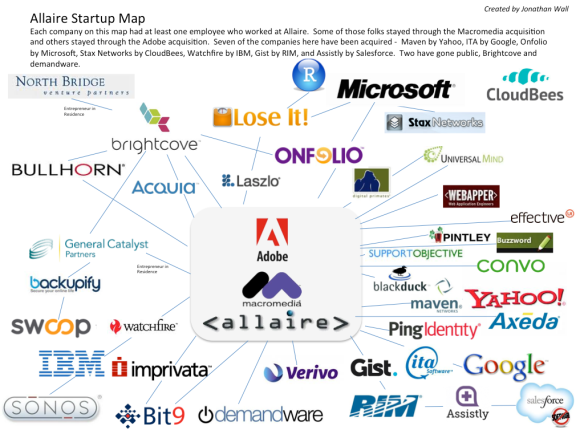 Update:  April 24, 2012 – Jeff Tapper and Rob Rusher mentioned that a few folks left Allaire, Macromedia, Adobe to go work at consulting startups like Digital Primates and Universal Mind.  I’ll add those in as soon as  I can.